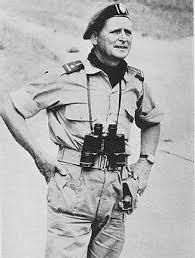 As per the ICAEW Archive


"Among chartered accountants past and present, few could be more infamous than former FCA Thomas Michael Hoare. A hero to many, a villain to others, Hoare was born in India in 1920. After serving as a British army captain in North Africa during WWII, he qualified as an ICAEW member in 1948.

Hoare came to international attention through his activities in postcolonial Africa in the 1960s. As perhaps the world’s most famous mercenary since Xenophon, he conducted operations in the rebellious Congolese province of Katanga.

A couple of years later, his group, now known as ‘5 Commando’, worked with Belgian paratroopers to rescue civilian hostages held by Simba rebels in Stanleyville. This operation saved hundreds of lives.

However, his actions, during what was seen by many as a proxy war between the Soviet Union and the West, led to opprobrium from behind the Iron Curtain. East German radio demonised him as ‘the mad bloodhound Mike Hoare’, usually now shortened to ‘Mad Mike’ by fans and detractors alike.
The silver screen paid its own tribute to Hoare with the film The Wild Geese, in which Richard Burton’s character was believed to have been modelled on Hoare himself. Hoare was employed as a technical advisor on the film.

Although many ICAEW members considered his activities unsavoury, the institute was unable to expel Hoare from membership. He had not broken any ICAEW rule and was also scrupulous about paying his membership subscription.

In 1981, his failed coup d’état in the Seychelles changed all that. Hoare and his followers had landed in the country disguised as a charitable drinking club known as ‘The Ancient Order of Froth-Blowers’ with their weapons hidden beneath false bottoms in their luggage. After heavy fighting at Mahe airport, Hoare and his team refuelled and then boarded an Air India aircraft, directing the captain to fly them to South Africa. Hoare was later found guilty of hijacking and was sentenced to 10 years in prison. On the back of his criminal record, ICAEW excluded him from membership in August 1983.

Hoare still resides in South Africa and has published numerous books about his experiences. To our knowledge, he no longer practises as an accountant."

You have the peace of mind knowing that your accountants (your tax return agent) fees will be paid by the insurance without any Excess for you to find.

Please click here for details.
Posted by Ken Frost at 10:54 AM 0 comments