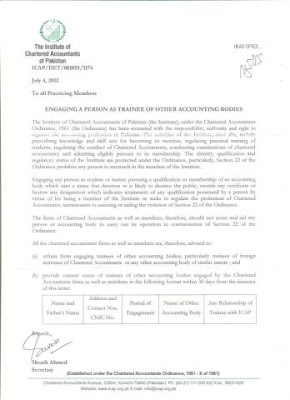 
"A fellow member of the institute wrote to me today, voicing his fears over the dilution of the ICAEW brand wrt less demanding entry requirements for members of the profession who qualified in India and Pakistan.

"I recently discovered that ICAP(Pakistan) members just need to pass ICAEW 4 papers to become ICAEW members. Moreover ICAP members do not need to undergo any training with ICAEW ATO.

In past (until last wk) ICAP members needed to pass ICAEW 4 papers plus undergo 2 yrs training with ICAEW ATO to become ICAEW member, but now ICAP members do not need to undergo any training.

I do not know why ICAEW is giving its membership of other institutes members in this way. If ICAEW does not want other institute's members to undergo any training in ICAEW ATO (which is main strength of ICAEW), then I have to say merger with ACCA is a better option....

ICAEW has given more relaxation to ICAI(India) members."

Whilst the ICAEW may be relatively relaxed about brand dilution, it appears that ICAP are not.


"Thousands of ACCA students are planning a protest march on the headquarters of the Institute of Chartered Accountants of Pakistan (ICAP), in Islamabad, tomorrow.

The march is in direct response to a letter sent by the ICAP to audit firms allegedly reminding them that hiring students with ‘foreign’ accountancy qualifications breaks Section 22 of the Chartered Accountants ordinance 1961.

Social media sites erupted over the weekend with some students suggesting the letter must be a ‘fake’. Others wondered if ACCA, ICAEW and CIMA students would be deemed as ‘working illegally’ in Pakistan. "

Does this ruling apply to ICAEW students?

Here is a link to the ICAEW's page about ACA training in Pakistan.

You will need to meet one of the criteria to be able to study for the ACA from ICAEW.


"I believe that the core issue is that the ICAP is losing ground to the ICAEW in Pakistan. New student members joining the audit firms wish to opt for ICAEW qualification as oppose to ICAP.

This is because they know that they can do better with the ICAEW than the ICAP overseas.

ICAP's student numbers are down and hence such an action has been taken in order to protect their interest."

This appears to have stirred up a hornet's nest.
Posted by Ken Frost at 12:16 PM